He’s done it!  ‘Aquaman’, directed by James Wan and starring Jason Momoa, has become the most financially successful DC Universe movie for Warner Brothers.  The picture swam to a global box office total of $887 million, topping ‘Batman V Superman”s $873M.  ‘Aquaman’ debuted on the highly competitive weekend before Christmas and was the immediate champ, besting ‘Mary Poppins Returns’ and ‘Bumblebee’.  It has yet to abdicate the throne and is expected to remain at the top for a third weekend, even though ticket sales overall will be down, in the aftermath of the holidays.  It may seem premature, but at this point, ‘Aquaman’ is also expected to be #1 next weekend, as not many formidable new releases will be arriving. 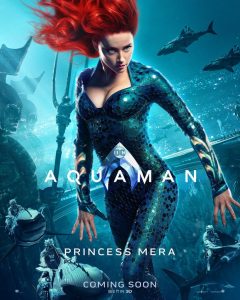 Ironically, the character Aquaman has long been a punchline among comic fans, who mocked his ability to “talk to fish”– something that is directly addressed in the film.  Despite his prominence in various animated projects, Aquaman has always been a B-lister at best, and was the subject of a long-running mocking storyline on the HBO series ‘Entourage’.

Helping the film ‘Aquaman’ rule is the foreign market, which is responsible for 75% of its take.  China alone delivered $279M, and ‘Aquaman’ was granted an extension to play in theaters there, which is somewhat rare for American movies.  In that country, ‘Aquaman’ is the second-most successful superhero movie, trailing only ‘Avengers: Infinity War’. 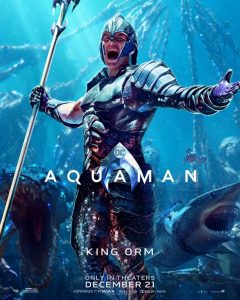 In contrast, ‘Wonder Woman’ was a sensation in the US but didn’t fare as well internationally, because in many markets, female-fronted films don’t do well due to cultural standards.

Analysts are predicting that ‘Aquaman’ will be the first DC superhero movie to cross the $1 billion mark next weekend.

In particular, audiences are reacting positively because at the very least, ‘Aquaman’ is a fun movie.  Its reviews aren’t as great as ‘Wonder Woman”s but it is still a step in the right direction for Warner Brothers, whose earlier DC movies were rejected for being too bleak.  Hopefully, this film will make things easier for Warner Brothers’ next DC movie, ‘Shazam!’ which premieres on April 5.

Have you seen ‘Aquaman’ yet?  Does it deserve this level of success?

This site uses Akismet to reduce spam. Learn how your comment data is processed.