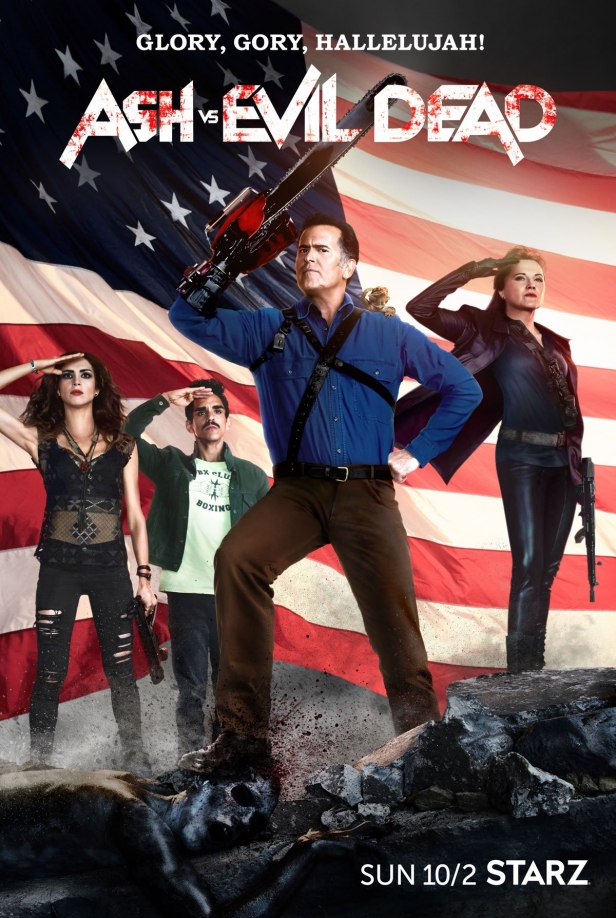 Looks like Ash (Bruce Campbell) and his friends are getting mighty patriotic in this new star-spangled poster for Ash Vs Evil Dead Season 2. END_OF_DOCUMENT_TOKEN_TO_BE_REPLACED

Series Plot: FBI agent Audrey Parker (Emily Rose) who arrives in the small town of Haven, Maine to solve the murder of a local ex-con. Before long, her natural curiosity lands her at the epicenter of activity in the curious enclave — which turns out to be a longtime refuge for people with a remarkable range of supernatural abilities.

Series Plot: Eureka seems like any other cozy, Pacific Northwest town, but is actually a secret community of geniuses assembled by the government to conduct top-secret research. What they’ve unwittingly created is a place where anything imaginable can happen… and does. The series stars Colin Ferguson, Salli Richardson-Whitfield, Joe Morton, Erica Cerra, Neil Grayston, and Niall Matter.

Eureka is currently being filmed on location in Vancouver, B.C., and there is a great list of quest stars that will be on this new season including Jaime Ray Newman, Matt Frewer, Wil Wheaton and none other than Jamie Kennedy (Ghost Whisperer, Scream trilogy), for a guest appearance on the show’s fourth season.

Jamie Kennedy will play Dr. Ramsey in the episode entitled “The Story of O2,” directed by series star Colin Ferguson. In the episode, Sheriff Jack Carter (Ferguson) leaves Eureka to visit his daughter Zoe (Jordan Hinson) at Harvard while the town celebrates Space Week. A new self-propagating oxygen technology developed by Dr. Ramsey in order to potentially colonize on Mars mysteriously begins to build up in the atmosphere above Eureka threatening to incinerate the entire town. The episode is scheduled to premiere Friday, July 30, 2010.

So make sure to tune in to see whats happening in Eureka!

Officer Vince Faraday was a good cop trying to clean up a corrupt city. Framed for murder and left for dead, he suddenly found himself separated from his wife and son and forced into hiding. Now, inspired by his son’s favorite comic book hero, he’s taking the law into his own hands, and playing a deadly game of chess with the powerful kingpin who framed him. With the hope of one day reuniting with his family, The Cape is sending a loud message to all criminals… run.

The show is set in Chicago, rich with the typical elements contained in popular works of vampire fiction. At this point it is still unclear whether the vampires will live in secret, or in a world where they can exist out in the open.

Frank Grillo who will take on the role as Nick Monohan has revealed his character is a Chicago homicide detective who gets himself in a bit of jam in Chicago, and decides to retire and take his family to The Gates.

Here is how ABC describes the series:

Like most families that settle inside The Gates, the Monahans are unmoored from a complicated life they abandoned in Chicago. Named the new police chief of The Gates, Nick Monahan is expecting a change of pace in this quiet suburb. Nick’s wife, Sarah, and their children, Charlie and Dana, are embarking on new adventures as well. Their house is to die for, but amidst the excitement, Sarah is still burdened with the revelation that her husband may not be the man she thought he was. Charlie and Dana will also face some challenges of their own: Along with navigating the trials and tribulations of adolescence, they’ll also face the daunting task of fitting into their new upscale school, where their new friends run in tight-knit packs.

There’s something very different about this place, almost… haunting. Unions will be complicated by friends with unnatural influence, insatiable housewives will struggle with ravenous cravings, and teenagers will be cursed with keeping their beastly instincts in check. The Monahans are facing an uncertain fate. Nick is about to be tangled up in a mystery where he will begin to piece together the dark truth about their new home, and the supernatural elements that lurk behind the shadows of The Gates.

This show could have great potential but only time will tell how it will compare to the other series like True Blood, Vampire Daries and Supernatural.

I along with most LOST fans rejoiced as the final season premiere of LOST finally aired Tuesday night on ABC! The three-hour premiere event was absolutely unforgettable, but we know you’ll want to re-watch a few scenes (or even the entire 3 hours) as soon as possible or if you was unlucky and missed it. Don’t worry, we have good news!

You can re-watch Tuesday night’s full premiere on ABC.com here.

While you’re there you may want to check out photos from last night’s episode, clips, video interviews with the cast and much more! Keep up with everything LOST throughout the final season on the show’s official site here.

Here is the official synopsis, promo trailer, and images for Fringe episode 02×14 ‘Jacksonville’. You can check them out below.

When the sole survivor of a building demolished by an earthquake in downtown Manhattan proves to be from the other Earth, Walter leads the team to Jacksonville, the source of a related experiment that he and William conducted years ago. Now only Olivia and the secrets of her past can prevent another catastrophe.

Well those of us who love our SciFi and Horror all know Robert Englund very well from TV and movies like V the original, Galaxy of Terror, The Phantom of the Opera, The Vampyre Wars and the list goes on and on but most everyone knows him as Freddy Krueger from Nightmare on Elm Street. Now that actor Robert Englund has been replaced by Jackie Earle Haley as Freddy Krueger in the A Nightmare on Elm Street reboot, Englund has a bit more time to once again take on other roles and do some special guest appearances on TV series.

Englund who is now age 62 has signed on to appear in a episode of Fox’s hit television series Bones. The plan is to make a slasher-themed episode and have Englund play a creepy custodian at Brennan’s old high school.

The story finds jaded Brennan (Emily Deschanel) planning to skip her high school reunion, until a murder sends her and Booth (David Boreanaz) to the scene to investigate. The episode will air this spring.

And as a kicker O’Toole won’t be alone when she guest stars on Smallville, as she’ll be joined by her real life husband, Michael McKean. McKean will be reprising his old role as Perry White, which he played once before on the series.

O’Toole and McKean will guest star on episode 21 this season. Smallville executive producer Brian Peterson tells says that Perry White’s return to the series will bring him, “closer to his destiny” and show Perry’s introduction to Lois Lane.

The studio has just announced that it has partnered with E1 Entertainment to develop and produce a TV series based on Push and has hired screenwriter David Hayter (Watchmen, X2) to pen the script for the series pilot.

The new series will purportedly be an extension of the science-fiction thriller, centered on people with paranormal powers who band together to take down a corrupt government agency.